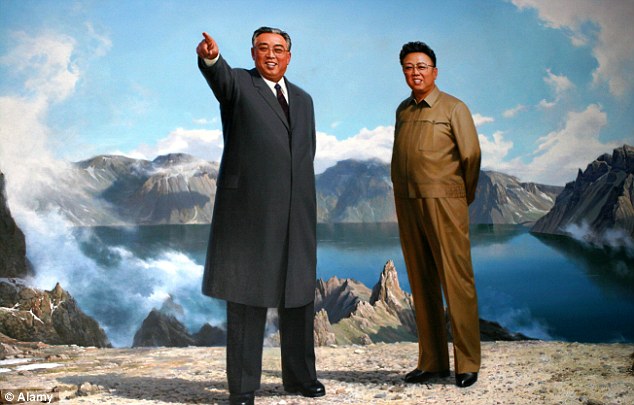 Mount Paektu, or Baitoushan as it’s called in in Chinese, does have a very special, almost sacred meaning for South and North Koreans. What Mount Fuji is to the Japanese is Mt Paektu to the Koreans. It’s the birthplace of their ancestors, of the Korean nation. It is also the place where, according to North Korean propaganda, Kim Il-sung organized the resistance against the Japanese, the colonial occupant of Korea in the 1930s. The current North Korean leader Kim Jong-un is frequently hailed as “the Prince of Paektu” in North Korea. In short, we are dealing here with a volcano of mythical proportions!

The imposing crater lake (Tianchi) on top of the mountain is one of the most important attractions in Northeast China for Chinese and South Korean tourists. There is only one minor problem: according to Sino-North Korean border agreements of 1962 only half of Paektu and the surrounding Changbai nature reserve lies on Chinese territory. Moreover, the Chinese regularly claim their historical sources prove Paektu has belonged to China since ancient times. The Chinese maintain in the 1962 agreement China made a huge concession to North Korea. South Koreans fiercely oppose the Chinese stance with their own historical testimonials and sources which, in their eyes, leave just one conclusion: Paektu is Korean. Aha, a mountain full of nationalistic sentiments and emotions too…

For illustration, the historical moment: Kim Jong-un and the South Korean president Moon Jae-in on the North Korean side of Mt Paektu Sept 20 2018, refer f.e. https://edition.cnn.com/2018/09/20/asia/mount-paektu-kim-jong-un-moon-jae-in-intl/index.html

The death of Kim Il-sung, the great leader of North Korea, on July 8, 1994 resulted in hysterical scenes in Pyongyang: images of weeping North Koreans even reached Western TV audiences. If we had to believe the North Korean media immediately upon his passing the active volcano Mt Peaktu erupted! Below is an article about Mt. Paektu which I offered to the Volkskrant in August 1994 having made a visit to Paektu, on the Chinese side, in mid-June 1994. This remote area was not a favorite destination for Chinese tourists back in those days. The article was not deemed news worthy at the time, i give it a second chance here, followed by a brief explanation of recent developments around this inflammable mountain.

Dance on the volcano

The moment the Great Leader Kim Il sung took his last breath a violent storm began to torment the sacred mountain Paektu at the North Korean border with China. Terrifying whirlwinds and torrential rain showers incessantly pounded the mountain walls and made the majestic volcano shiver and shudder. The “heavenly lake”, the idyllic volcanic lake at the top of Paektu, changed into a swirling sea of lava. Only after three 3 days the mountain stopped its mourning for the death of the Great Leader, according to Pyongyang’s central news agency on July 15th...

Paektu does have a magical reputation among North-and South Koreans. The mountain is the creator of the North Korean nation, a source of hope, immortality and countless miracles. According to the ancient myths, the ancestors of the Korean people one day descended from Peaktu and dispersed over the peninsula. Another -modern- myth says Kim Jong-il, son of Kim il-sung, was born on the slopes of Paektu, predestined to succeed his father and rule North Korea.

The Tumen river springs from the east side of this holy mountain, the famous Yalu from the west. Together they form the natural borderline between China and North Korea. In the past Paektu was part of Korea. Nowadays the mountain is split into a North Korean and a Chinese half. From the mid-50’s the Chinese communist government began to claim part of the mountain as a reward for the Chinese assistance to North Korea in the Korean war. It culminated into a border agreement in which the frontier was drawn through the middle of the volcanic lake, allegedly “in mutual agreement.” The Chinese side of the mountain lies in the Changbai natural reserve in Jilin province, China. This region harbours a million ethnic Koreans, who also have passionate feelings for Peaktu.

After the normalization of relations between China and the Republic of Korea in 1992, South Koreans finally have a chance to make their pilgrimage to this remote sanctuary. They couldn’t/can’t travel via neighbouring and hostile North Korea to Paektu. Each year thousands of ecstatic South Korean tourists make the trip to the holy, elevated peak through China instead. These enthusiastic, well-to-do travellers are an easy target for shrewd Chinese money sharks. Every mile along the sandy road towards the entrance of the natural reserve a new security- or toll post pops up: each tourist bus or car with foreigners is stopped and each time requested to pay 25 yuan (~Fl 5.-). To get to the foot of the mountain another 125 yuan entrance fee per person has to be paid, versus 25 yuan for a Chinese visitor.

“Do you mean there is no cable car or easy path to the top?” Mr. Son glares at his Chinese tour guide/interpreter in disbelief. The cheerful, ~45 year old factory boss from Seoul, enjoying his holidays with his wife, gets a rude awakening: if they want to get to the lake at 2,150 meters, they will have to hike over a partially steep path with sharp, slippery rocks and stones near a waterfall. Most South Korean tourists have second thoughts and prefer to make themselves immortal in other ways. They are fine with just taking a picture at the foot of Peaktu before hopping back on their buses. But Mr. Son and his spouse aren’t intimidated, put on a brave face and join me for the hike, while chatting away with me in their best English. Their Chinese tourguide follows them in silence, clearly less enthusiastic. Mrs. Son turns out to be a real mountain cat: in her pumps she walks in a fast tempo, not afraid to jump from one stone or rock onto another. Within half an hour she has left her struggling husband behind. Their tourguide is no longer in sight.

“Beautiful, beautiful” exclaims Mr. Son. After almost 3 hours of hiking he has also finally reached the heavenly lake. He makes a spontaneous little dance of joy with his wife, not minding the broken glass and empty beer cans lying around. The panoramic view is breathtaking, though it unfortunately isn’t a sunny, bright day. Heaven and earth seem to meld into each other. Clouds are hanging just above the surrounding slopes, which are partly covered in snow. The big, oval lake colors shiny bluegrey in the distance. At the North Korean side there is no sign of life, as far as we can see.

Mr. Son meanwhile feverishly tries to pull out a few small mountain plants, his enthusiasm has no limits. He wants to take a souvenir home: “Paektu is our Korean soul, do you understand”? he shouts. Or is he saying “Korean soil”?? Back at the foot of Paektu I ask him if an eventually re-united Korea would perhaps re-claim the whole mountain. “Paektu is Korean” stresses Mr. Son. He re-thinks for a moment and, while glancing at his tourguide who has finally re-appeared, he tells me: “perhaps to keep peace we will have to share Paektu in the future with the Chinese too. But for sure a cable car will be built, at least at the Korean side. We will take care of that” he laughs.

The entire world got a glimpse of the importance of Mt. Paektu for both Korea’s when President Moon Jae-in became the first South Korean to reach the mountain top on North Korean territory during his third summit with Kim Jong-un in September 2018. Staring at the volcanic lake Moon Jae-in is believed to have uttered “I have always been determined to visit Peaktu through Korean land, not via China. Now my wish has come true.” Peaktu has increasingly become the symbol for reunification for those South Koreans longing for it.

Just like Mr. Son in 1994, ordinary South Koreans still don’t have a chance to visit the volcano via North Korea: Pyongyang does not grant visas to South Korean tourists. Annually more than one million (!) visitors, of which > 70% coming from South Korea, travel to Paektu via China. Modern roads and luxury hotels have been built by the Chinese, including a ski resort in the Changbai region. Small vans bring tourists close to the top, only a short walk is required to get to Tianchi, the heavenly crater lake. Some of the wishes of Mr. Son seem to have been met by the Chinese….

But perhaps not in the eyes of every South Korean: some South Korean politicians suspect China is stimulating domestic tourism to Paektu purely out of self-interest. According to them China aims to make its own population more aware of the cultural and historical significance of the Changbai region in order to re-inforce Beijing’s sovereignty claims over the whole area. These South Koreans also accuse the Chinese of deliberately banning South Korean companies from participation in the economic development of the Changbai region.

The 1962 border treaty between China and North Korea is not recognized by South Korea as nobody really knows the details of the accord. Moreover, when the impoverished North Korean government decided to allow the Chinese to develop a small area around Paektu on North Korean territory in 2012 (to promote North Korean pilgrimages and Western tourism), Seoul expressed strong concerns….

The sensitivity of the sovereignty issue had already surfaced in 2006 in the run-up to the so-called Asian Winter Games held in China. The Chinese chose Mt. Paektu as the location to lit the fire, to great discomfort and disapproval of its neighbours …

China added more fuel to the fire by simultaneously submitting its own request to UNESCO to declare the Changbai region, including Paektu, a World Heritage site. UNESCO wisely ignored the Chinese application. Nationalists in Seoul, on the other hand, demonstratively expressed their disgust of China.

South Korean speedskaters chose to make a statement at the awards ceremony during those same Winter Games in 2007, proudly holding signs above their heads which read “Mt. Paektu is our territory”

Various similar incidents have occurred throughout the years, with especially emotions in South Korea running very high. North Korea never makes any public statements on the border disagreements with China, yet given the special, historical significance of Paektu for the Democratic People’s Republic of Korea and for the Kim dynasty, one is obviously inclined to believe Pyongyang does also consider the volcano and Changbai as Korean territory….

Should North and South Korea ever be reunited, it’s unlikely such a reunified government would again endorse the 1962 Chinese-North Korean border treaty. It’s illustrative Beijing does actively support and facilitate multilateral cooperation and talks for large, interregional economic initiatives in the Jilin province such as the well-known Tumen Delta project (see border cases # 1), but in border disputes like Mt Paektu is avoiding those multilateral approaches. It prefers either to stay silent or to just simply imply it aims for full sovereignty. In view of the ever growing Chinese international importance and Chinese self-awareness and nationalism, it’s questionable Beijing will ever be willing to make concessions to the border agreement on Paektu.

The dance on this volcano is expected to continue…

In 1994 it still took quite some effort to get to Paektu due to the lack of regular train connections to the nearest by station, Baihe. Nowadays there is a fast rail connection to Baihe, the closest place to Paektu. In 1994 Baihe was just a very tiny station in the middle of nowhere: from this small village a long dirt road led to the foot of Paektu. In 2019 the village has ~4000 inhabitants.There are regular bus connections from Baihe to Mt. Paektu, owing to a new excellent highway. September is the best month for a visit.

The Chinese government has made many places of interest more accessible in Jilin province, as shown in this map: