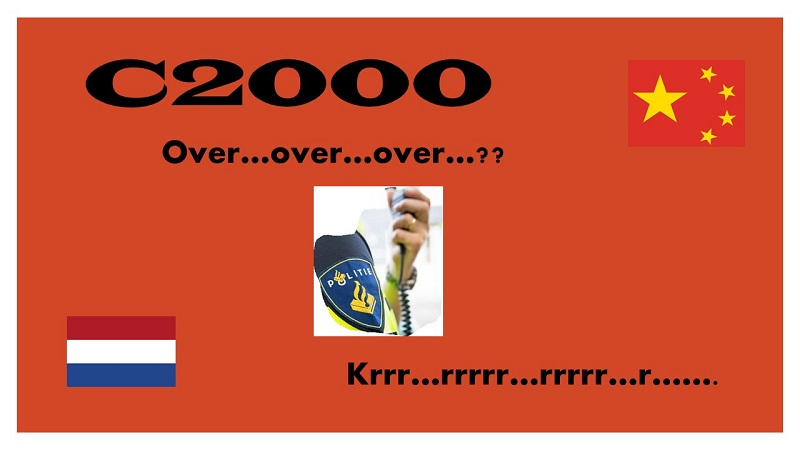 03/03/2021_In a few earlier posts the saga concerning the introduction of the renewed C2000 Tetra network, a closed radio communication and voice network for the Dutch emergency and security services (“OOV”: police, ambulance, fire brigade, military police) was already highlighted. Unfortunately that saga has not come to an end …

As a reminder, C2000 consists of three parts:

C2000 is based on the worldwide TETRA standard. TETRA (Terrestrial Trunked Radio) is the standard for mobile communication for the OOV. Unlike GSM, TETRA allows direct communication without first having to dial an extension number, so without losing any time.

As known, the introduction of the new system in January 2020 was accompanied by a number of problems: users in particular reported lost connections when switching between network towers. Certain speech / audio applications did not work properly either and the audio quality was perceived as poor. The network got overloaded several times as well.

The Ministry of Justice extended “the aftercare period” for the renewed system to 1 July 2020, in the hope that the problems would be resolved by then. After the summer, Minister Grapperhaus had to admit that the system still was not working flawlessly, and TNO was called in for an analysis of the persistent complaints from a number of ‘special users’, particularly within the police force. For ‘national security reasons’, the public was not informed about the exact nature of the problems with the system. The police did, however, get access to a fallback option (so-called push to talk app) should C2000 fail or become unavailable.

TNO recently reported its findings, which were also shared with Dutch Parliament. Hytera Mobilfunk, a German subsidiary of the Chinese Hytera Communications, is the main supplier of the C2000 system besides British 2Way and the German enterprise Eurofunk. Together they are involved in the transition, delivery and management of the new C2000 system. These parties are largely responsible for the smooth running of the tendering, delivery, installation and management of the network, with of course a well-functioning system as their commitment and goal.

In a letter accompanying the report, the Minister of J&V states that the network has been functioning stably for some time now and has proved capable of handling peak loads. The number of complaints has fallen sharply after the summer, according to Grapperhaus. But it should be immediately noted that due to the Corona pandemic, the police and military police have had to deal with far fewer events in problematic, demanding contexts (think f.e. of so-called ‘high-risk football matches or large festivals) than usual: how the system functions in (extremely) difficult circumstances seems to have been insufficiently tested in practice (TNO’s study took place before the January 2021 ‘curfew riots’).

Moreover, it is not inconceivable that users do not feel heard when reporting their complaints, as a result of which they have become tired of reporting … The number of registered complaints could therefore be lower than the actual number of problems encountered. But officially, the number of registered incidents or problems with C2000 after the initially (very) strong growth following the migration to the renewed system has meanwhile fallen to just above the pre-migration level.

The TNO research mainly serves to ‘technically optimize the system’ and to map possible external disruptions as well as to draw up an objective performance assessment (‘performance indicators’) of the overall network in the eyes of the users. The perception of the users can then be periodically tested in the future on the basis of these measurable, objective criteria.

The accompanying ministerial letter emphasizes once again that the renewed C2000 only offers an interim solution, soon to be replaced with a new approach which will be partly based on the new public 5G network. There is a rapidly growing need for the mobile use of data by the emergency services: examples include the use of messaging services, video streaming and location and sensor data. The basic idea is that for this so-called “mission-critical communication” the government services will have their own core network in the future and will also use the 5G radio networks of one or more Dutch operators. But the introduction of such a completely new system will probably take a few more years.

For the time being, the OOV will have to make do with the renewed C2000 system. So let’s consult the TNO report… Oops, in the preface it is explicitly stated: “Nothing from this publication may be reproduced and / or made public by means of print, photocopy, microfilm or in any other way, without the prior permission of TNO.” Excuse me, isn’t this a public report sent to Parliament, which can be easily found on the tweedekamer.nl portal?

Well, let me just say that the group of dissatisfied users has a pretty damning opinion about the supplier Hytera, the main organization responsible for the voice network. Hytera is in principle able to offer an extensive product line – from peripheral and terminal equipment, from base stations to systems and total solutions, including all required soft- and hardware. Hytera Mobilfunk is the former Rohde & Schwarz (R&S) Professional Mobile Radio GmbH (RSPMR), a German leader in Tetra technology and # 2 behind Motorola. In 2012, the German company was sold to the Chinese Hytera Communications, which lacked Tetra know-how, but was strong in building terminals and equipment. These combined forces enabled Hytera to offer low-cost total solutions. The Dutch government concluded its contracts with the German branch. Dissatisfied C2000 users nevertheless give the impression that Hytera cannot fully deliver what it has promised.

The complaints from users do also paint a picture of non-coordination between government departments that are charged with the supervision and implementation of the renewed C2000 network. The cooperation with Hytera and the mutual coordination and communication between client/supervisor and supplier clearly leaves much to be desired. For an outsider like mijngroeve.nl it is difficult to assess to what extent the complaints are merely start-up problems or expressions of grumpy, unwilling users who are unable to quickly adapt to a renewed system. Or are we dealing with crystal clear symptoms of structural problems?

In any case, there still seems to be a disconnection, not only in the C2000 network itself, but also between users, supervisor and supplier. Remarkable for a system that should guarantee the safety of users (police, etc.) and citizens at all times and should have offered a significant improvement over the old system.

Mijngroeve.nl has previously alerted the reader to Motorola’s lawsuit against Hytera Communications, which still hangs like a sword of Damocles over the head of the Chinese company with annual sales of ~ $ 1.2 billion. Last year, a US jury fined Hytera for stealing Motorola trade secrets and for infringing its copyrighted software code in developing most of its portable digital mobile radio (DMR) radios, culminating in compensation of $345 million in indemnification and $ 419 million in fines, still to be paid by Hytera. The Chinese enterprise has been fighting this verdict, but has declared its US branch bankrupt in the meantime. Furthermore, Hytera Communications, including its subsidiary Mobilfunk, was blacklisted by the Trump administration last year, cutting it off from US component and sub-suppliers. As far as I know, the new President Biden has not annihilated this blacklist.

To what extent the German branch has been or will be affected by the American actions? Earlier this blog described how the geopolitical technology war has cornered the Dutch government with regard to the use of Huawei in the Dutch 5G network. Huawei has been cut off from crucial American chip supplies, which will make it difficult to supply / maintain 5G equipment in the future. With this example in mind, one wonders whether Hytera Mobilfunk will be able to continue to deliver and maintain its products and service undisturbed in the Netherlands in the future, particularly when the Chinese parent company would find itself in even tougher circumstances.

Will the TNO findings have consequences in Dutch Parliament? Over the past two years, several posts in mijngroeve.nl have described how the changing geopolitical climate has led to a hardened parliamentary stance on China. Huawei has now come under heavy fire, as has a company like HikVision, which are accused of playing active roles in the systematic repression of the Uyghurs in Xinjiang. The Lower House is increasingly reluctant to allow these types of companies to play any (prominent) role in the Dutch infrastructure. Last week Dutch Parliament symbolically and by an overwhelming majority of votes (only the ruling VVD party voted against) endorsed a non-binding motion (= without further demands for action towards the cabinet), in which it states that genocide is taking place in China on the Uyghur minority, citing UN Resolution 260, commonly known as the “genocide convention”.

There are also growing concerns among MPs about the dangers to national security if crucial infrastructure is provided (in part) by companies from an autocratic country that continues to commit hacking, engage in unfair competition and violate human rights and where the communist government has a stronghold over the business of its multinationals. Confidence in Xi Jinping’s China is at an all time low.

The growing number of news articles about, for example, the use of scanners from the Chinese company Nuctech by Dutch customs in the port of Rotterdam, about face recognition technology developed by Huawei to detect Uyghurs, about the role of HikVision’s cameras in suppressing the protests in Hong Kong etc etc. are all indications of an increasing sense of angst and indignation. With the elections approaching, human rights have become a hot topic at the same time. Well, Hytera Communications is the main supplier to the Chinese Ministry of Public Security. Will Hytera, including Hytera Mobilfunk, perhaps soon be under the magnifying glass of the Dutch Parliament and the political parties too?

Incidentally, we hear little from the cabinet Rutte about the role of Huawei in the Dutch telecom infrastructure, what is the latest status? Will KPN and T-Mobile (be allowed to) continue to place Huawei equipment in the periphery of the network? When accepting Huawei for 5G and Hytera for C2000, the Rutte cabinet has knowingly taken the changing geopolitical situation too little into account and ignored the new political reality for too long. Here too one can speak of a disconnect…

The preference for companies such as Huawei, Hytera and HikVision has even put the transatlantic relationship under stress. The frenetic clinging to Chinese suppliers apparently is mainly driven by financial and trade considerations: it stems from the Dutch preference for wanting to sit in the front row for a dime and for fear of damaging the economic interests of the Netherlands in the PRC by banning these Chinese companies from the Dutch infrastructure. And to completely replace or eliminate them at this stage will take considerable time and … money.

For too long, the Rutte cabinet has convinced itself it could separate the 5G rollout and the introduction of the renewed C2000 from all those geopolitical developments and its ‘China strategy’. In reality Rutte, Blok and Kaag are increasingly struggling to find a balance between China as ‘partner, competitor and system rival’, as technology, economy and national security are more than ever intertwined and cannot be separated from the Chinese American rivalry, the transatlantic relations and the resulting shifting moods in Dutch Parliament. The prime minister, leader of a political party that has claimed to always put security first, is finally paying the price. 5G / Huawei and C2000 / Hytera will remain headache dossiers for any new Dutch cabinet.