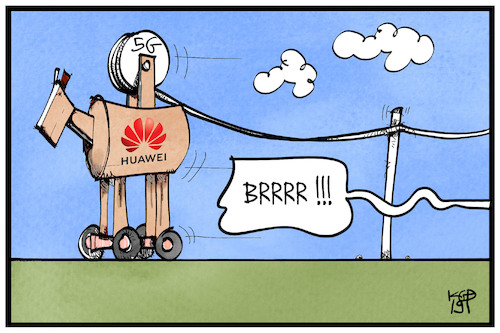 10/25/2019_This spring the Rotterdam city council, instigated by PVDA member Dennis Tak, kicked off a debate about the rollout of 5G in the important Dutch port city, fueled by warnings from the US, our own AIVD intelligence service and recently also from the EU agency for cyber security. All these bodies have expressed concern about the possible participation of “foreign telecom companies” (read Huawei) who do not have transparent business operations yet close ties with their national government, which in turn is not guided or controlled by any democratic checks & balances ( = China).

Communist China is also one of the most notorious hackers in the world and does not have any legislation protecting the privacy of its citizens. On the contrary, according to the 2017 national security law, Chinese citizens and companies must at all times cooperate with the Chinese intelligence services to protect national security. This would f.e. mean Huawei could be forced to hand over to the Chinese government 5G data stored on servers/in the cloud if requested by the communist authorities.

Alarm bells have gone off in the Rotterdam city council. The city councillors do recognize other risks are involved in the rollout of 5G than mere technical or medical ones. On October 17, the PVDA, VVD, CDA and Leefbaar Rotterdam adopted a motion asking the Ministry of Justice for:

Dennis Tak does state in the media he would prefer the national government to completely ban Huawei. He argues against the use of Chinese equipment and software in the 5G’s network core and periphery, such as antenna masts. He calls the ambivalent attitude of the Dutch cabinet “naive and half-baked”. He clearly prefers to make a political judgement of the trustworthiness of the 5G providers part of the approval process. As I have described in my blog posts, prime minister Rutte, originally one of the drivers of large-scale cooperation with Huawei, is -under American pressure- trying to find a new balance in the relationship with China, while hoping not having to offend the Chinese too much in public.

Most EU countries-which just like Holland initially opened their doors wide for Huawei- are having second thoughts about the telecom giant. The European Commission has been looking for diplomatic ways to express its wish for a more limited role of the Chinese company in its 5G networks. On the one hand the EU maintains a socalled “country-neutral approach” and, on the other, is tightening the security requirements to be imposed on suppliers of 5G equipment. Huawei will perhaps no longer be able to meet (all of ) these security requirements, although it is up to each individual European Member State to make the final assessment. In other words, Huawei is not banned in advance by the EU as a candidate for the 5G roll-out.

The Amsterdam city council has been a lot quieter: Amsterdam has been very cosy with Huawei for several years. Huawei is an important player in the Amsterdam’s plans to turn our capital city into a “smart city”. Football club Ajax is also very proud of its China connection: since 2014, it has been co-operating with various Chinese companies. https://www.mijngroeve.nl/sport-en/ajax-huawei-break-up-the-contract/ https://www.mijngroeve.nl/sport-en/ajax-huawei-contract-extension/

In 2019, Ajax’ most eyecatching Chinese sponsors/partners are: Huawei, the telecom giant, and HikVision, world leader in surveillance cameras and technology. Both companies are expected to play an active, prominent role in transforming the area in and around the Johan Cruijff (aka Amsterdam) Arena into a “smart stadium” ahead of the kick off of the European Football Championship in 2020. The nearby Bijlmer station and the emergency services in the area would all benefit from the Arena as smart stadium.

Both Chinese companies have been banned by the Trump government with the consent of the entire US Congress. They are considered a threat to US national security. HikVision is also accused of contributing to the systematic suppression of the Muslim population in Xinjiang by the Chinese government: the camera technology in the “re-education camps”, where ten if not hundreds of thousands (!) of Uyghurs are locked up as “potential terrorists” , is supplied by HikVision. In Amsterdam, football fans in and around the stadium are being watched by HikVision cameras, while all the movements by the players on the training pitch at “de Toekomst” are monitored with the help of Chinese technology as well.

For the time being Ajax officially sees no reason to re-consider cooperation with Huawei and HikVision: the collaboration has been very good and no evidence of Huawei espionage etc has been found. Perhaps Ajax would like to argue it will or does not (have to) share data or images with the Chinese partners that are stored in servers in the Netherlands (?). Moreover, they might claim enough security precautions will be taken to guard privacy and data protection. Yet the city government- and Ajax officials in Amsterdam must be getting nervous: the debate about Huawei and the overall China strategy of the Rutte government has been intensifying in Dutch parliament over the past months. Unclear is whether this could affect Amsterdam’s love for Huawei…

Rotterdam has decided not to await the outcome of this national debate. The Rotterdam city council members have pro-actively expressed their concerns about Huawei to the local & national government. It will be interesting to see whether this will trigger their fellow party members in the capital city into action too … and whether the municipality of Amsterdam and Ajax/ Johan Cruijff Arena’ plans and initiatives with Huawei and HikVision will be adjusted as well …. maybe they are already quietly being adjusted while I am writing this … to be continued …