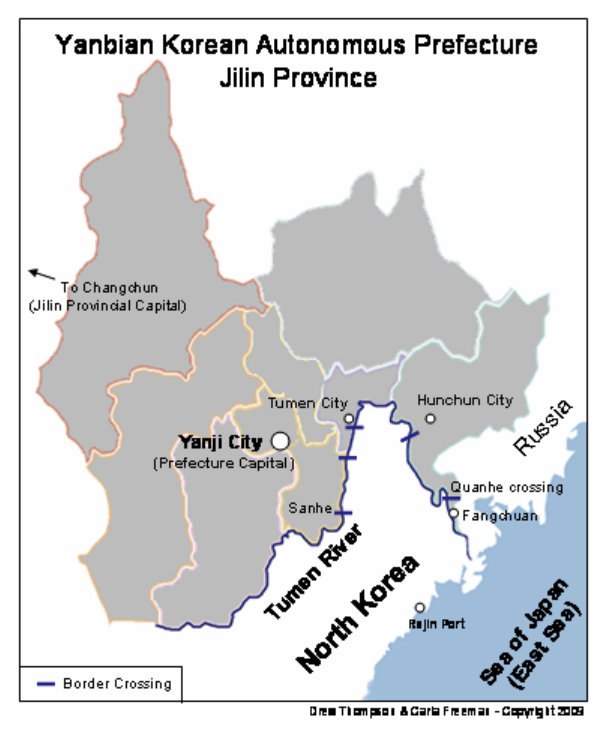 The 1400 km long border between China and North Korea consists of 2 rivers, the Yalu and the Tumen. The actual dividing line between China and North Korea for the most part runs straight through these rivers and over or along the islands or sandbanks in these waterways. In total there are no fewer than 468 sandbanks or little islands in the Yalu and Tumen, of which North Korea has owned 280 since 1962, China 187 and Russia 1. China does not really recognize North Korean sovereignty over all these 280 islands, but the communist brotherly love between both countries has sofar kept these disagreements from turning hostile…

China is North Korea’s gateway to the world. The border has 15 crossings, predominantly consisting of simple rail or traffic bridges, mostly constructed by the Japanese in the 1930s-40s. The best known crossing is at the border between Dandong, China and Sinuiju, North Korea: the North Korean leader Kim Jong-un usually travels to Beijing by train over the Sino Korean Friendship bridge at Sinuiju. 60 to 70% of all trade between China and North Korea is going over this bridge. If North Korea opens itself more to the outside world, the railroad is expected to play a prominent role in the initial stages of economic reform. The road network in North Korea is still in a deplorable condition.

This in my second blog post about the border area. In June 1994 I visited several of the border crossings: what follows is an impression of what it was like in 1994 and what it looks like in 2019, for which I make use of recent Google Earth info. China is not too keen on having Western busybodies visit the border with North Korea, and Google’s street view is not available in both countries.

The following blog post does focus on the border crossings in the Tumen delta near Hunchun, in the far north of the Chinese province of Jilin.

Hunchun: the crossing at Shuaiwanzi, 1994

About 20 km west of Hunchun city, I discover an old road bridge originally built by the Japanese in the 1940s. The bridge at Shuaiwanzi is no longer in use, but apparently serves as a local tourist attraction. I can walk up to the middle of the bridge for a fee of 1 yuan, although a busy gesticulating woman tries to stop me from taking pictures. After an additional payment she no longer minds. The very low water level around this bridge is very noticable : one could in principle reach the other side just by wading through the river, so it seems. Halfway the bridge hangs a chain and a warning not to walk any further. According to the locals, the bridge was partially dismantled during the Korean War in the 1950s for fear of an American invasion. The bridge has never been restored to its full former glory: on the North Korean side a meter-long section is even missing right after the chain.

The fundaments of another Japanese (railway) bridge can be seen on the left-hand side. After the Japanese invasion of Manchuria in 1931, Japan and Russia fought fierce border conflicts on Chinese territory. Some say the steel tracks and sleepers were all removed by retreating Russian troops in the late 1930s.

For over 10 years the Chinese have -in vain- been trying to push the North Koreans to build a rail link between Hunchun and Hunyung-ri station on the North Korean side, which would at least connect Hunchun and its hinterland to the dilapidated North Korean rail network. The bridge connection should be erected at Shuaiwanzi over the remains of the dismantled Japanese railway bridge. The total distance of this railway link would be less than 7 km, of which about 3.5 km would lie inside North Korea.

This new rail connection has not yet been established. For the North Koreans it seems a bridge too far, the willingness and resources to invest are lacking. The UN sanctions are probably also slowing down Chinese plans to modernize this potentially new border crossing: Beijing does not want to announce triumphantly or publicly these sort of initiatives in the current international climate. Via Google Earth it can be established the Shuaiwanzi traffic bridge is still broken, while the pillars of the old Japanese railway bridge are standing unchanged, their heads just surfacing above the water.

The sole Chinese rail link across the Tumen River remains the old railroad bridge near the city of Tumen, 70km northwest of Hunchun (see borderline cases # 3 next week).

My next destination is about 10 km west of Hunchun and concerns the road connection with North Korea at Shatuozi. The Chinese-North Korean border is taking a special turn here. Right in front of the shore of Shatuozi is one of the larger sandbanks annex islands in the Tumen river. This “peninsula” is North Korean territory and almost glued to China! The border doesn’t run through the middle of the river, but around the south side of the island. The road connection first makes its way from China over this North Korean peninsula before morphing into the bridge over the river. I am allowed to walk about 40 meters up the road at Shatuozihangdao (Shatuozixiadao), the Chinese entrance to the North Korea border. To my surpize I am even given a chance to take a picture of the Chinese customs post. Just before I start walking onto the road, a Chinese truck filled with North Korean timber is driving towards me, returning from North Korea. For the rest it’s extremely quiet around here, no traffic at all.

The Chinese have been aiming for a new, modern highway / bridge at Shatuozi for years, hoping to connect the pensinsula to the Chinese G12 highway at Shatuozi Highway Port. It still hasn’t happened. The old, single-lane Japanese road / traffic bridge at Shatuozi as visited by me in 1994 is still in use, nothing has actually changed. The North Koreans have hardly developed the peninsula, the few existing buildings mainly serve as border guards’ posts…

However, both countries agreed around 2014 to replace an older bridge (Quanhe-Wonjong bridge) near Fangchuan, the triple-country point between China-North Korea and Russia, southeast of Hunchun. The old bridge had become too weak and narrow for heavy freight traffic. The new bridge was built with Chinese money in 2016, but it still ends in a North Korean sand plain: there is no paved road on the North Korean side. This bridge near Quanhe was opened right before the tightening of the international sanctions and now forms the most important link between Hunchun and the area around Rason (Rajin) harbor in North Korea, some 50 km away.

For a remarkable picture by Ed Jones/Agence France-Presse in the New York Times, December 11 2017, refer the following link: a view on the new Quanhe bridge, shot from the North Korean side. The Tumen river is frozen, as can be seen on the left of the bridge https://www.nytimes.com/2017/12/11/world/asia/china-north-korea-border.html

China claims that it strictly adheres to the tightened international sanctions against North Korea, which were introduced in 2017-2018. Those UN measures ban imports of food and agricultural products, machinery, electrical equipment, earth and stone, and wood from North Korea, and block exports to North Korea of all industrial machines, transport vehicles & devices, including all iron, steel and other metal products. In addition, under the influence of the sanctions several governments have promised to take measures to repatriate North Koreans working in their countries…

In 2015, Chinese imports from North Korea amounted to over USD. 2 billion versus Chinese exports at >USD. 4 billion. China generates a significant trade surplus each year because North Korea has little to export apart from raw materials (coal, iron ore, silver, wood), textile and fish. According to Chinese figures, imports from and exports to North Korea plummeted by 50% in 2018 compared to 2017, resulting in USD. 150 million in imports and around USD. 2 billion in exports. But what goods are exactly included in this mutual trade is completely unclear.

The actual volume and character of the trade between the two countries remains rather vague. It is for example unknown how much is being shipped from Rason and other North Korean ports to China and vice versa. Chinese trade figures are rarely reliable anyhow if they are politically sensitive. North Korea is also believed to provide Chinese fishermen access to North Korean waters against payment: North Korean fish, crabs, and shrimps could recently again be found on the shelves in and around Hunchun according to some Western media.

Beijing has in the meantime publicly called on the international community to relax sanctions against North Korea. China says it is worried about a new famine in its neighboring country. Following the meeting between Trump and Kim Jong-un in June 2018 and the escalating trade war between China and America, several Western and Japanese journalists have reported a sharp increase in Chinese freight traffic across major border crossings, including at Shatuozi and Quanhe, based on local observations and satellite data.

Tourism does not fall under the international sanctions regime: Pyongyang tolerates more tourism than ever before out of an urgent need for foreign currency. The resulting income amounted to ~USD 44 million for Pyongyang in 2018, 80% of which comes from Chinese visitors. Chinese day tourism is on the rise again after a dip in 2017. In January of 2019, a hundred curious Chinese pleasure seekers were given the greenlights by Pyongyang to cross over the frozen river near Fangchuan into North Korea, ironically in almost the same manner and location in which hundreds of North Koreans have tried to flee their mother country in the opposite direction over the past decades …

for more news and info on North Korea and China, see for example

for a Chinese view of the world, refer www. globaltimes.cn, the 2018 im-and export figures used in the above post can be found in an article dated january 14 2019