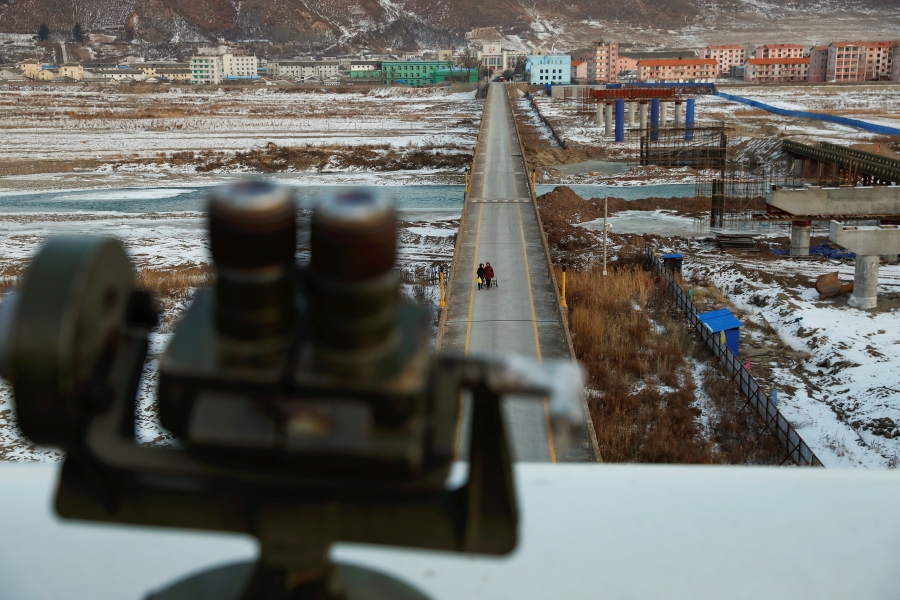 Pedicabs are eagerly awaiting Chinese tourists in front of the drab Tumen station. Western tourists are rare in this remote area, my arrival is cause for some commotion. Tumen city lies at the Tumen river: from the Chinese quay the North Korean city Namyang can be spotted on the opposite side. That’s also the main attraction of this otherwise sleepy Chinese city. Tumen has around 120,000 inhabitants, half of whom are of Korean descent. Part of this Korean-Chinese community maintains (business) contacts with family, friends or acquaintances across the border.

The locals and Chinese tourists can look back in time over here: small telescopes have been installed to provide a view on North Korea. The Chinese shake their heads in disbelief and feel sorry when they talk about their neighbour. North Korea reminds them of their own country in ’60-70’s: depressing, ideologically rigid and economically in decline. In those days, at the height Mao’s crazy Cultural Revolution, some desperate Chinese even sought refuge on the other side! But in the ’90’s North Koreans are trying to flee to China . In both cases the root cause is the same: hunger and persecution.

There is not much activity in Namyang. North Korean buildings are scarce, dark and gray, just a few people can be spotted walking on the street. Two bridge connections with North Korea offer the other tourist attractions in Tumen: these links are in walking distance of each other. First there is the Tumen river / road bridge, built around 1941 by the Japanese army. There is more traffic on this bridge today than a few days ago at Shatuozi near Hunchun (see borderline cases # 2). Cars and trucks are crossing in turns from both directions, having to use a single lane road. Customs officers don’t allow me to climb the gate to get the best view over the bridge.

Half a kilometer downstream lies the Tumen railway bridge. This steel connection was erected by the Japanese in 1932 and is still in use. In fact, it is the only functioning rail link across the Tumen river in Jilin province. The originally constructed pedestrian path along the single railway line is blocked: people no longer can walk over this railway bridge to the other side.

Wandering around the Chinese quay, I am surprized to see how narrow and shallow the border river between China and North Korea sometimes is. Several sandbanks pop up in the water. I can imagine desperate North Koreans choose these types of locations for their illegal and very risky escapes, praying not to be caught by North Korean or Chinese border patrols. Rumors about an increasing flow of refugees from North Korea have been circulating since 1992. During my short stay in Tumen the locals keep their lips tight when I probe them on this topic. China’s official policy is to immediately return arrested refugees. With this tough approach the Chinese government hopes to discourage a North Korean exodus.

Just like Hunchun, Tumen has meanwhile been connected to the high-speed rail network. And the G12 highway runs to the city. Tumen certainly has made progress, although, in line with Hunchun, it hasn’t undergone a spectacular metamorphosis like Beijing, Shanghai and Guangzhou. The population has grown to around 140,000 and domestic tourism has increased. The telescopes are still there, staring at thy poor neighbors remains unbelievably popular among the Chinese.

Trade with the Korean neighbor leaves a lot to be desired, Kim Jong-un’s nuclear escapades and the international sanctions hamper Tumen’s development. The inhabitants of Tumen are particularly disappointed by the business opportunities they are missing out on. And every time Kim Jong-un gives the greenlight for another nuclear test some 200 km across the border, the tremors can be felt up to Tumen.

The old road bridge and railway link do still form the connection between Tumen and Namyang. Satellite photos and checks by specialist websites such as Beyond Parallel (https://beyondparallel.csis.org/) show the North Korean infrastructure has hardly changed. Namyang station has just as few facilities and limited trainwagon capacity as in 1994. Nevertheless this oldfashioned single railway crossing is crucial for North Korea’s exports of iron ore and timber extracted from the Namyang area.

In 2016 both countries decided to “jointly” construct a new two-lane bridge next to the old traffic bridge. China has been doing all the work: it supplies the materials and is responsible for the construction. The building of the bridge slowed down following a flood caused by heavy rain, making the Tumen River rise and swallow parts of Namyang. The rail track got severely damaged too. Impacted buildings in Namyang were demolished and replaced by high-rise. In August 2018, the following photo appeared on the “Daily North Korea website (www.dailynk.com)”, a news organization closely monitoring developments in North Korea from abroad.

Daily NK released a video on November 15 2018, showing the bridge is nearing completion. (https://www.dailynk.com/english/new-china-north-korea-bridge-across-tumen-river-nears-completion-video-reveals/ )  .  When the bridge will be officially opened is unclear: for fear of negative international perceptions the Chinese have perhaps decided to postpone opening the bridge as long as the strict UN sanction’s policy against North Korea is in place…. But if the upcpming Trump – Kim summit doesn’t deliver any positive results and the American-Chinese trade war goes into further escalation mode, China might no longer feel bothered by such international perceptions.

Chinese barbed wire along the Tumen bank serves as an extra deterrent for North Koreans who plan to illegally cross the river. Cameras have been installed at multiple locations. The Chinese government also has demanded the local population to immediately report illegal and suspucious activities along the border. The peak in the refugee flow was between 1995 and 2000, every year thousands of North Koreans escaped poverty and oppression: the world gradually realized North Korea was suffering from a horrendous famine, after years of economic mismanagement and the collapse of the Soviet Union, cutting of a financial life line. Half to one million Koreans are believed to have died of hunger, sickness and disease. In those days even plenty of North Korean border guards jumped to the Chinese side….

One of the first actions of the new leader Kim Jong-un was to address the border security & surveillance. He had right away more fencing installed all along the river. The number of border patrollers has been drastically increased: moreover, Kim tries to combat desertion among his border guards by having them rotate frequently. Escapes are also discouraged in other ways: family members of North Korean escapees have been sent to prison camps in retaliation. And refugees sent back by China are tortured and even executed according to several westerns reports … https://www.theguardian.com/world/2015/may/07/north-korea-defectors-drop

The number of refugees may have fallen, still mention is made of North Korean escapees in various media. (for a recent story about the hardships refugees have sometimes to endure, see eg https://www.bbc.com/news/av/world-asia-46921729/north-korean-defectors-who-had-to-escape-twice

Corrupt North Korean and Chinese border guards and soldiers are sometimes turning a blind eye to fleeing North Koreans in return for payments. An underground network in Jilin province and elsewhere in China – just like in the ’90’s – is helping refugees to escape via China to other countries. It is difficult for an outsider to get a grasp of what is really going on in the dim border area around Tumen and Hunchun….