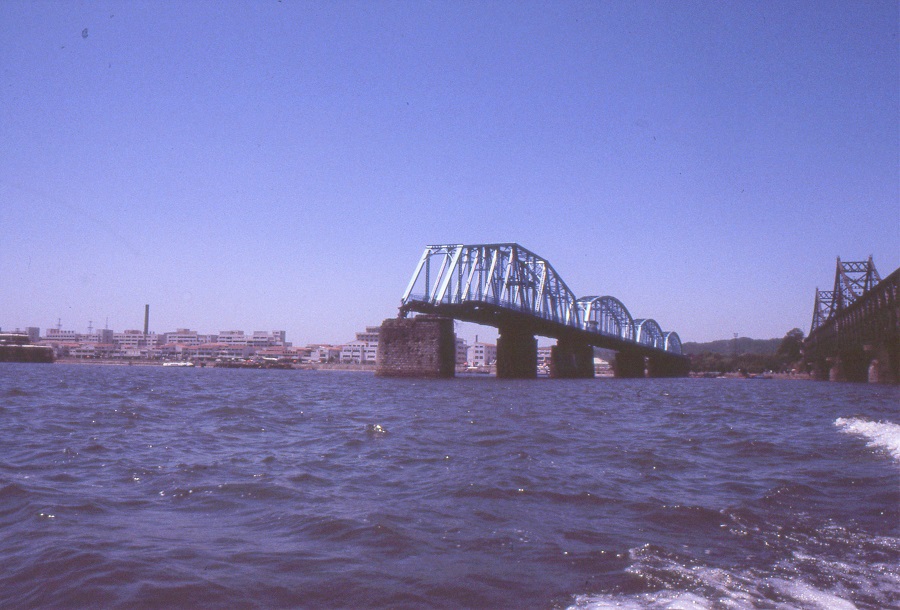 Kim Jong-un will travel by train from Pyongyang via China to Hanoi in Vietnam for the summit with Trump, a 60-hour journey. Back and forth more than 8000 km! The tradition of travelling by train over long distances started with Kim-Il Song, the grandfather of Kim Jong-un. Lacking a decent airline, Kim Il-Song preferred the more comfortable, better-equipped train. Kim Jong-il, the father of Kim Jong-un, took the train during his reign out of sheer fear of flying…

How about Kim Jong-un, why doesn’t he fly, the man who does possess nuclear weapons and long-range missiles?? Kim Jong-un just doesn’t trust his own planes and pilots. In 2018 he flew to Singapore in a plane (and crew?) borrowed from China. In 2019 he prefers to follow in the “footsteps” of the great leader Kim Il-Song, whose foreign train journeys have been hailed by the North Korean propaganda machine for decades.

Kim and his group of faithful will cross the border between North Korea and China at the Friendship Bridge aka Yalu River Bridge, between Sinuiju and Dandong, the most important border connection between both countries. His transit through China can be seen as a polite bow to Beijing, the old ally, ahead of the summit with Trump. Though the train has 21 bulletproof wagons, it can’t be called a bullet train. The top speed within North Korea lies at 50 km, in China at ~80 km per hour. Kim’s train is preceded by a smaller North Korean safety train which has to check the tracks. A train full of bodyguards closes the procession.

If you want to get an idea of the condition of the North Korean bridges and (rail) roads, just take a look at the legendary Friendship Bridge. The bridge is a combined road and railway connection, only suitable for one-way traffic. The traffic direction is reversed every two to three hours. The bridge was built by the Japanese in 1942 and is the most important (rail) link between China and North Korea. The formal border between North Korea and China runs through the middle of the bridge.

In September 2015, a truck flipped over on the North Korean part of the bridge because of the very uneven road surface. The accident resulted in severely damaged railway tracks. Another incident followed in October, after which the North Koreans attempted to repair the road surface. Apparently the North Koreans didn’t do a great job: the Chinese deemed the bridge too unreliable and unsafe and closed it off temporarily for freight traffic towards the end of 2015 and again a few times in 2016. The Chinese decision to close down the bridge could also be seen and propagated as a sign of Chinese support for the escalating international trade embargo against North Korea.

The technical limitations of the bridge and the miserable condition of the road surface on the North Korean side, only allow trucks with a load capacity of max 20 tonnes to drive at snail’s pace over this crucial cross-river connection. For comparison: trucks with a load capacity of up to 50 tonnes are very common in the Netherlands. In principle around 300-500 trucks in total could cross the Yalu every day. The train does at least run at higher speed and clearly is the most important freight transporter, with the main load this week being Kim Jong-un and his entourage!

This is all the more remarkable as a new road bridge, for which the Chinese put up $350 million, was completed in 2014 several miles downstream of the Yalu near Dandong. This bridge is still not in use and ends on the North Korean shore in a no man’s land. Kim’s regime has not connected the new bridge to the (primitive) North Korean road network.

In recent years, the Chinese government has made tremendous efforts to upgrade the infrastructure in Northeast China (see also borderline cases # 1 & 2). Besides a good road connection, Beijing would also like to establish a modern railway link from Dandong to Pyongyang: the Chinese hope to get a North Korean commitment for co-operation before others such as South Korea or Japan could strike a deal once sanctions would be lifted and Kim Jong-un would decide to open the doors for foreign investment. Beijing is extremely displeased and frustrated about the lack of North Korean guarantees and progress. Pyongyang doesn’t have the will and resources to invest in the (rail) road network on its side of the border. China will also anxiously monitor the talks between Trump and Kim, who cunningly follows the tactics used by his grandfather by playing off the big and regional powers against each other.

After a few more on and off periods the traffic over the Friendschip Bridge finally fully resumed in 2018: since last year Kim Jong-un has several times jumped on the train to Beijing to calm down and re-assure his Chinese neighbors. Whether he has fully succeeded remains to be seen. All the old bridges between both countries as well as those new connections which have not been used or completed are somewhat symbolic of the current relationship between China and North Korea. There are many ties from the past, from the common struggle against Japan and the US, and from the communist “brotherly love”. But they don’t guarantee a smooth and close relationship in the future. China’s investments have not paid off yet. Beijing has to wait and see if they really can win over Kim: the North Korean leader still has many more rivers to cross.

For news on the relationship between China and North Korea see f.e..: