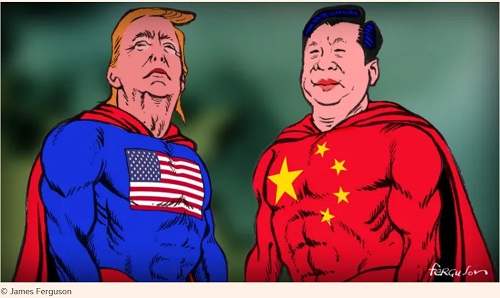 01/13/2020_ January 2020 is quickly turning into one of the hottest and most tense months of recent years. Talking about climate change! How the atmosphere has altered between the USA and China! Although today one could also easily point to the dramatic forest fires in Australia and Iranian-American tensions to prove January 2020 is indeed historically hot.

What are the events to focus on these coming weeks to judge where the USA-China relationship (and EU-China ties!) is heading?

A) The Phase 1 Trade Deal

The signing is expected this Wed Jan 15th. It will be interesting to see the American, Chinese and international, in particular EU, (public) responses. Europe has been worried Trump, the champion of the America First doctrine, has been trying to pushing EU countries into an anti-Chinese stance, while simultaneously “sneakily” concluding a big trade deal with the PRC, undercutting the EU’s own trade pact and relationship with the Chinese. Europe is simply afraid to get sandwiched (in the dispute) between the two powers.

Details of the trade deal are not likely to be shown to the public before the scheduled ceremony on Wednesday between US President Donald Trump and – tellingly? – Chinese Vice-Premier Liu He. Chairman Xi Jinping will be absent! Chinese state media have largely abandoned their earlier rhetoric that China “doesn’t want to fight but is not afraid to fight” or “ will fight to the end”, after it became clear Beijing chose to make compromises with Trump, seeing the negative effects of the trade war (f.e. rising unemployment) on its economy.

Does Xi Jinping want to save face (for domestic political reasons) or to indicate his displeasure with the deal by just sending his deputy? Xi possibly feels personally upset by America’s recent behavior or -alternatively- just wants to signal or imply his unease with the whole negotiating process and outcome, in which in the end China perhaps had to make more concessions than Xi was originally willing to offer…Anyhow, his absence doesn’t bode well for the future of Phase 2 talks..

Naturally the American government wants to control the narrative, reflecting Trump’s desire to take credit, emphasize the deal’s “enormous importance” to positively influence public opinion. The President surely hopes to avoid too much scrutiny of the agreement’s provisions, which could call into question whether this tumultuous 18-month trade war has been worth all the costs, culminating in so much uncertainty and suffering among his base voters, i.e. the American farmers. Reportedly American farm bankruptcies rose 24% over the past year, while farm debt is about to hit a record US$416 billion.

While the trade deal is not expected to be radical, it should of course be welcomed as it intends to address the trade imbalance between the two sides. It does at least stop for now the negative spiral in tit-for-tat import taxes impacting the Chinese, American and international economy. Yet let’s not forget most of the current tariffs will remain in place. Big question will be how China will implement the deal, especially in respect to its promise to increase imports of American agricultural products, and how it will be monitored/enforced by both sides. https://www.mijngroeve.nl/history/usa-europe-china-crossing-swords/ . And whether America’s gain with today’s trade agreement, will mean other countries’ (f.e. EU) big loss in trade with China…

To what extent the trade deal does address intellectual property and cybersecurity issues is rather unclear. Measures aimed at protecting trade secrets are said to have been put into the agreement. But no progress seems to have been made on forced technology transfers or complex issues like industrial policies and state subsidies, trade in sensitive high tech goods, management transparency of Chinese state enterprises, sensitive non-tariff barriers, and items that touch on (digital) sovereignty. They are all left to the Phase 2 discussion, whose formal kick-off date has not been set yet…

B) 5G Roll Out in Europe

Boris Johnson and Angela Merkel both have kept on postponing their final decision on whether to allow Huawei equipment into their countries’ 5G network. Today (Monday 13 January) another delegation of US officials has arrived in Britain to make a final effort to persuade the UK to ditch Huawei equipment in the upgrade of its telecoms network. Johson and Merkel (via CDU/CSU Unions group’s scheduled compromise proposal later this month) are believed to announce their final decisions in 1-2 weeks.

As I wrote before, US senator Tom Cotton has introduced a bill that would prevent the United States from sharing intelligence with countries that allow Huawei Technologies to operate 5G network technology….This bill is complimentary to earlier initiatives in the House which will force U.S. companies and U.S. stakeholders to participate in global standards-setting and will channel federal resources into projects that ensure international wireless policies meet global standards while protecting the growing industry against foreign influence and cyberattacks. It will prohibit federal funds from being used on telecommunications equipment that could pose a threat to critical infrastructure and creates a fund to replace current equipment manufactured by particular foreign companies (i.e Huawei and ZTE).

In this context it’s also good to remember that Beijing updated its cybersecurity laws in October 2019, including a new cryptography law that has come into effect on Jan. 1 2020. The legislation requires companies (Chinese and foreign) in China to turn over encryption keys -which are crucial to protect the confidentiality of information transmitted and stored on networks- if requested, making those networks open to the Chinese Communist Party.

Under these rules, all companies that operate a network must tell the government how sensitive the data they handle are, and what strategies and government-approved infrastructure they use to protect them from cyberattack. If the Chinese Ministry of Public Security determines there is an Internet security issue or risk it has the right to perform an (remote) access inspection! Chinese officials, once they gain access to the network of a foreign company in China, could probably even be able to penetrate the networks of that company outside the country in such a scenario..This would obviously seriously conflict with the cybersecurity rules set by the USA government to which American companies have to comply. I doubt this problem has been resolved in the Phase 1 deal….

With the current mood in Congress, Trump himself will have little room for manoeuvre on the Huawei or cybersecurity topics, even if he would like to after Jan 15th. The Congress has been prioritizing American competitiveness and national security in 5G with bipartisan support and is demanding the President to implement a strategy to secure next-generation telecommunications systems and infrastructure and maximize their security. American Congress is asking the transatlantic allies to do the same…

C) The situation in Hong Kong

The results of the Taiwanese presidential elections on Jan 11th in which sitting President Tsai Ing-wen, who strongly opposes “China’s one country two systems concept”, won by a landslide is likely to be a source of new inspiration for the protesters in Hong Kong. How is Beijing going to react to more unrest? And how is communist China going to behave towards a more assertive Taiwanese government?

Moreover, any deterioration of the human rights situation in Xinjiang will cost China the little sympathy that’s left in American Congress and the European Parliament for the PRC…

There are a lot of rumors the US government is contemplating to introduce more stringent export control rules regarding strategic goods, incl. high-tech products, which would also affect Western and Taiwanese companies using American technology/content to fabricate products for the China market. The US Government allegedly has plans to lower the standard of “Derived from US technology” from 25% to 10%. If implemented, products that incorporate 10 percent or more US-origin, dual-use content (civilian-military) would require an export license from US Dept of Commerce to be legally sold to Chinese customers.

This move could f.e. impact TSMC’s supply to its Chinese customers, affecting its orders for <=16nm technology processes. In a related development, TSMC, the world’s largest pure-play semiconductor foundry, which has vehemently denied receiving any American pressure to stop shipping wafers/chips in 14nm to Hi-Silicon (design branch of Huawei), its no. 2 customer, has recently hired an (ex-Intel) Washington lobbyist, Peter Cleveland, to be in touch with the American government about the U.S.-China tensions and lessen the eventual fallout from Washington’s ongoing dispute with Beijing, Bloomberg reported today…

At the same time SMIC, TSMC’s much smaller competitor from mainland China, has seen increased orders in 14nm from Hi-Silicon as the latter no doubt would like to mitigate its risks and reduce dependency on Taiwan in anticipation of further American pressure on TSMC (and the Taiwanese government). The American court cases against UMC, another Taiwanese foundry, accused of illegally transferring Micron’s trade secrets, IP and know-how to its memory joint-venture, Fujian Jinhua, in the PRC, are still on-going as well… Add to this the revelations on the export stop of ASML’s EUV equipment to China following severe American pressure and one can understand the high tech industry around the globe is getting increasingly nervous about the future of the American-Chinese relationship….A few foreign companies have already started relocating some of their branches and activities from China to other Asian countries….

The phase 1 trade agreement will provide some short term relief, stock markets are likely to go up again. Yet the lack of any enthusiasm from Beijing to hail the clauses of the Phase 1 deal have cast serious doubts over the Phase 2 negotiations, which are supposed to focus on forcing China to implement structural changes in its state-led economic growth model. Huawei’s CFO is still under house arrest in Canada with no immediate solution in sight. And Democrats and Republicans in the US are only united on one topic: that China is a system rival, making it crucial the US wins the 5G race and gets others on its side….

It suggests the competition and rivalry between Beijing and Washington is being viewed as long term in American political and military circles…. I wouldn’t be too surprized if the top of the Chinese communist party is actually holding the same view irrespective of any Phase 1 trade agreement… Maybe that’s what Xi Jinping’s absence this wednesday truly symbolizes…Could in other words the trade agreement ultimately mark the official starting point of a gradual decoupling of the two economies? Food for thought…

On Jan 10th a Pentagon official informed the U.S. Army plans to deploy two specialized task forces to the Pacific capable of conducting information, electronic, cyber and missile operations against Beijing, as part of the Pentagon’s effort to counter China’s military activities in the region and bolster alliances with regional partners. These task forces are slated to be deployed over the next two years because “China will emerge as America’s strategic threat” according to the same official….

Europe better pay close attention and quickly formulate and coordinate its global geopolitical & China strategy……assuming it does want to have and implement one…Next EU-China summit supposedly in March….