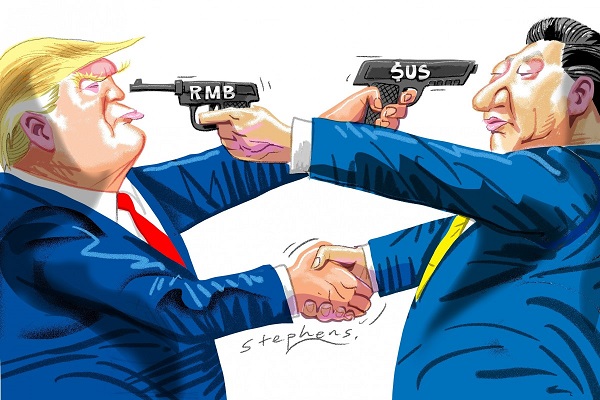 11/10/2019_In one of my earlier posts I have described how UMC, a leading Taiwanese high-tech company active in the so-called pure foundry business, has been caught in the geopolitical technology battle between America and China. UMC has been officially sued by the US government for corporate espionage for the sake of the People’s Republic of China (!!). Civil and criminal cases are running in the US courts against (former) UMC employees: the outcome is hard to predict…..

This week international media have reported that TSMC (Taiwan Semiconductor Manufacturing Company), the no. 1 pure foundry in the world and supplier of wafers to American, European and Chinese customers, has come under heavy pressure from the US government to reconsider its links with Huawei / HiSilicon.

As we know, Huawei has been blacklisted by the American government, meaning American chip suppliers are no longer allowed to supply their (most advanced) chips to Huawei for the manufacture of new mobile phones, 5 / 6G equipment, etc. The Chinese telecom giant is trying to accelerate the development of its own chips via HiSilicon, its design branch. These chips use the most modern technology (7nm-5nm) that can only be offered at TSMC’ factories in Taiwan. China itself does not have the technology required to produce these chips.

HiSilicon is likely to become TSMC’ largest customer in 2020, accounting for ~15% of its sales (total TSMC sales ~ $ 35 – 40B). Meanwhile Taiwan depends on American military protection for its national security. The Trump government recently sold an extensive arsenal of weapons to Taiwan.. The island will have Presidential elections in January 2020. The ultimate goal of the ruling DPP party of President mrs. Tsai Ing-wen is Taiwan’s independence, whereas the opposition party’s KMT dream is to re-unify with the Chinese mainland. In practice, in order not to completely divide the island’s population, once in power either party holds on to the status quo, in which Taiwan continues developing its country and economy on its own terms while simultaneously keeping close trade ties with China, aiming to maintain peace with its powerful neighbor, counting on the military protection of the US. Taiwan’s 2 major political parties have -generally speaking- little to gain from upsetting China or its own politically divided population.

Taiwan’s economic ties with China have greatly expanded in the last 20 years, as TSMC’s business with China underscores. The growing fear in America (others might say paranoia) for China, shared by the entire Congress and partially fueled by Xi Jinping’s China First policy, raises the question whether a future Taiwanese government will face a more outspoken American quid pro quo: in other words, could Taiwan be forced to keep more distance from China in the high-tech field in return for (future) American military aid? After all, not only Trump but both Democrats and Republicans in Congress are not particularly fond of Huawei, HikVision et al. and seriously distrust China’s technological ambitions…

Naturally, the current Taiwanese government and TSMC deny that there is any American pressure (the Ukrainian President is still maintaining that too …). Taiwan and TSMC have publicly stated they have always adhered to the international rules regarding exports to China. However, the Taiwanese high-tech giant must be concerned about its reputation in the US. America is still a very important market for TSMC. This week reports surfaced that the company is in talks with the US government about setting up a US plant to address American security concerns. Part of the chip production of the American defense apparatus takes place at TSMC in Taiwan. Some American politicians apparently believe the risk of being technology dependent on a Taiwanese factory is becoming too big in the face of China’s aggressive push into the South China Sea. These politicians wish to bring the production back to America.

TSMC is wary of its reputation in America, as also evidenced by the fact that it has settled a patent dispute raised by Globalfoundries (GF), a much smaller player with some factories in the US and with a R&D branch taken over from IBM semiconductors, without any lengthy legal proceedings as usual in these kind of cases. With the patent lawsuit, the Abu Dhabi (!) financed GF tried to put TSMC into a very unfavorable light in the US, while positioning itself as an American manufacturing company. GF’s American management must have betted its approach would go down well in the current American political climate. TSMC must have feared the same. To avoid reputational damage, the Taiwanese company preferred a super quick solution to the dispute instead of a prolongued and tedious legal battle which could generate more negative publicity and perceptions in American political circles.

The Netherlands and Europe are also trapped in the American-Chinese confrontration. I have written various posts about the upcoming tender of 5G equipment and the 5G rollout. Merkel has meanwhile fallen under heavy pressure from her own CDU to adjust her position on Huawei (=> her fellow party members want her to ban Huawei). Other parties in the Bundestag have also started to raise their concerns on Huawei. Dutch Prime Minister Rutte has kept his lips tight with regard to the final Dutch position on Huawei, but he and Dutch parliament must have noted the shifting position among German’s major political parties. Expect our prime minister to keep a close eye on what Macron and Merkel are going to decide in the coming weeks…

Even ASML threathens to be drawn into the American-Chinese feud. This week it was announced that the export of the most modern EUV ultraviolet equipment to China has been delayed. The Chinese ordered this equipment last year for their own chip factories: normal delivery time is 6-9 months. According to ASML the delivery has been temporarily suspended for purely administrative reasons as a required export license is still being processed by the Dutch government. The government adheres to the Wassenaar Convention, which aims to prevent the spread of conventional weapons and so-called dual-use equipment (civilian equipment that could be used for military purposes).

In the treaty, 42 mainly Western- and East European countries have agreed to subject the supply of sensitive technology to a licensing system. The EUV equipment that ASML wants to export to China apparently falls under one of the sections. As soon as the new license is issued, the delivery will happen, according to ASML, it’s just a matter of a few weeks … A Ministry of Foreign Affairs spokesperson has confirmed that the EUV technology is indeed on the list of strategic goods of the Wassenaar Convention. All member states revisit and review this list every December. It is not inconceivable that the United States, which no longer wants to see advanced semiconductor equipment being exported to China, will again assert itself …

No business as usual

Whatever the case, due to the American-Chinese tensions, it is no longer business as usual with China for the rest of the world, in particular not for the high-tech sector. Bill Gates has joined the debate: “Trying to stop Beijing developing innovative technologies is beyond realistic,” Gates has said. He emphasizes that trust must be mutual and “that China trusts US jet engines which could theoretically be switched off remotely.” Gates is also skeptical about the benefits of stricter US regulations regarding the issuance of visas for Chinese studying space and aeronautics, robotics and IT/ automation. “If you are so paranoid, what about the codes that are written by somebody whose grandmother or great-grandmother was Chinese?” Gates concludes “is there any piece of software in the world that you are willing to trust?”

Gates sketches one side of the coin, that of the consequences of an obsessive and maniacal America First policy. The other side of the coin shows an equally megalomaniacal China First policy by a communist regime that is not very keen on transparency, does not shy away from playing European countries and governments against each other, and stiffles any domestic criticism or opposition. And that is still closely intertwined with the Chinese business community and high-tech sector.

A “phase 1 agreement” in the so-called American-Chinese trade war is now supposed to happen in December 2019. Such an agreement will of course do little to remove the roots of the distrust of China in the US and vice versa, nor limit Chinese or American nationalism. Around the same time the European countries will also have to make their final call on the 5G rollout. And of course we should know by then if ASML will be allowed to export its EUV equipment to China …

December promises to be a hot month …

Thanks for tuning in to my ZFM Jazz broadcast of  August 14 2022, link to the full program to be published once available....