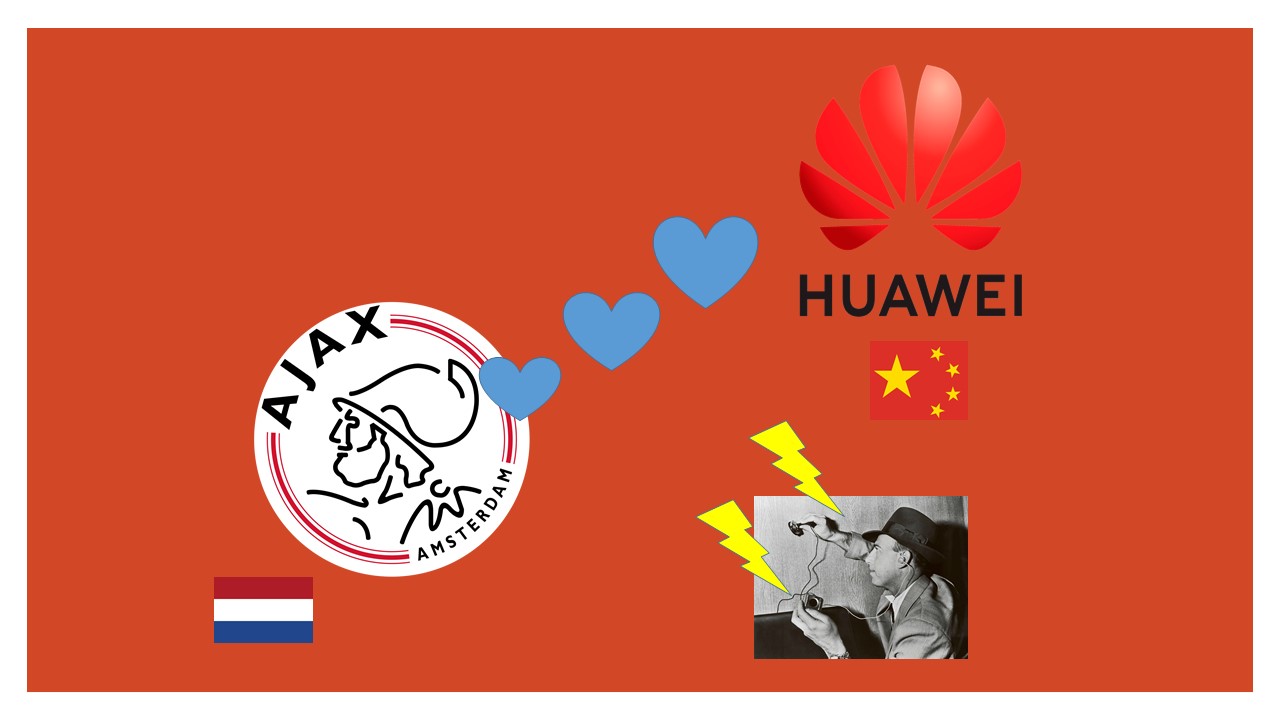 03/02/2019_At the beginning of December 2018 the Trump government is throwing the cat among the pigeons by requesting Canada to arrest and extradite Meng Wanzhou, Hua Wei’s CFO and daughter of the founder of the Chinese telecom giant. The Americans accuse Huawei (140,000 employees, world leader in 5G equipment, > $ 100 billion in estimated sales, private company, not listed on any stock exchange) of IP theft, malpractices and deliberately circumventing the US embargo against Iran. Canada and other Western countries are forced to take a position on another fundamental issue: will they allow a Chinese company to play an essential role in the communication infrastructure of their countries? The Americans have long suspected Huawei of spying and eavesdropping on behalf of the Chinese government. Trump is preparing an executive order which will ban Huawei from participating in the roll out of 5G and 6G network infrastructure in America.

Prime Minister Rutte initially tries to duck this crucial question. The Dutch government does state in November it’s formulating a new China strategy, which will be made public in the course of 2019. But the Dutch parliament is starting to feel uneasy once it’s becoming clear US Congress unanimously is rejecting Huawei. Rutte tells parliament he needs more time to finalize his answer. The Dutch prime minister prefers to adopt a wait and see attitude: he first wants to know if the major European countries will say no against Huawei.

Yet when the Chinese government starts retaliating for Meng’s arrest in Canada by randomly seizing Canadian citizens in China, our prime minister can no longer dodge his responsibility, although his response is in his usual ambivalent manner. Interestingly enough, with those random arrests the Chinese regime unintentionally underscores the American charges Huawei has a very special, privileged status for the Chinese government.

Following these events our prime minister says on January 25 at his weekly press conference the Netherlands should not be naive with regard to “the signals about espionage by Chinese companies”. Rutte is also concerned about the Chinese arrests and reminds Beijing Meng can expect an impartial and fair trial. He quickly adds Huawei is a renowned player in the technology sector, providing jobs in the Netherlands and worldwide. The Dutch government will “look critically at any risks associated with takeovers, investments and the purchase of certain goods and services ” by the Chinese.

Presumably Rutte isn’t talking about himself when he is speaking about naivety. It is not entirely clear whom he has in mind by saying “the Netherlands”. The Dutch government and our prime minister have played a very active role in luring Huawei to the Netherlands. Huawei’s first major European contract is with Telfort in our country, in 2004, during prime minister Balkende’ reign. Via the Netherlands (Amsterdam, Voorburg), Huawei rapidly expands its operations throughout Europe. For the successive Rutte governments, attracting as many foreign companies as possible is a key focus. Rutte visits Huawei in China in 2015, upon which the company confirms to set up a distribution center in Eindhoven. The VNO-NCW employers’ organization hopes for even more: Huawei is looking for a new headquarter in Europe. Why not the Netherlands? After all, the Netherlands does offer attractive tax breaks for innovative foreign companies.

The Dutch government also does not block telecom companies such as KPN and T-mobile from purchasing ever more equipment from Huawei for their 3 & 4G networks in the Netherlands over the years. The parliament occasionally asks some questions about the reliability of the Chinese partner and national security, in particular once the American intelligence services under Obama begin discouraging their Western allies from engaging with Huawei because of the espionage risk and the close ties of the company with the Chinese military apparatus.

In 2015 the KPN reassures the Dutch government after an audit of the Huawei’s labs in China: the tests and products meet the international safety and security standards except for a few minor points for improvement (which normally also occur with Western telecom companies). In the same year the cabinet decides to renew the C2000 system, the closed communication network intended for use by the Dutch emergency and security services. One of the suppliers is Hytera Communications, a Chinese company specializing in RF soft- and hardware. From 2017 this company is also put under the American magnifying glass. In 2018 it is finally banned by the Trump government. Minister Grapperhaus (Justice and Security) promises the Lower House in November 2018 no irreversible decisions regarding the roll-out of the C2000 system will be taken until new investigations determine it cannot be misused for espionage. On February, 12 2019 the same minister informs parliament the complicated risk assessment will take another 2 months. The installation of the C2000 system is postponed indefinitely …

The Americans are by no means making themselves popular in Europe by having their NSA do a large eavesdropping operation on mobile phone communication in the Netherlands and elsewhere around 2013, which Rutte labels as “completely unacceptable”. But the NSA case proves one thing: eavesdropping isn’t too difficult. In 2015 it is revealed the same NSA has tapped conversations of Merkel and other European government leaders. Perhaps the general European dissatisfaction and disbelief about these American actions drive Rutte and other European officials to no longer take the American warnings regarding Huawei serious…

For pictures and a report of the partnership, refer f.e.

The pride of Amsterdam, Ajax, has meanwhile also started working closely with the Chinese telecom giant. The two parties conclude a 3-year sponsorship contract and a 5-year technology agreement in May 2014. Edwin van der Sar, then Chief Marketing Officer at Ajax, says the following about the collaboration: ,, We are delighted to have signed this agreement. Huawei is the largest Chinese company in the Netherlands and therefore matches perfectly our ambitions. Moreover, Huawei is a very innovative company and their technological solutions will enable us to offer free WiFi to our supporters. “

The Dutch government’s love for Huawei reaches its peak in spring 2018. While America’s campaign against Chinese technology companies such as Huawei and ZTE is in full swing, Prime Minister Rutte gives Huawei an award for being one the largest Chinese investors in the Netherlands. The prize also honors Huawei’s excellent contribution to Sino-Dutch cooperation. Jeroen Nijland, commissionary for the NFIA (Netherlands Foreign Investment Agency), explains why Huawei is rewarded: “This year, I can proudly say, is an important year for the NFIA, ‘cos we celebrate 40 years of activities. As Huawei is part of that 40-year history, thrives in the Dutch business climate and contributes steadily to our economy, I am very happy to present this prize to Huawei Netherlands. ” The Dutch affection does have its limits, though: simultaneously the Dutch Ministry of Foreign Affairs advises Dutch participants of trade missions to China to leave their mobile phones at home due to risk of eavesdropping…

Despite the fact Huawei’s alleged eavesdropping and espionage practices have not been proven to date, one can of course not assume China will never use Huawei’s mobile devices or network equipment for malicious purposes. The concept of privacy is virtually unknown in China and it is doubtful whether a Chinese company will resist any requests or pressure from the Chinese government to pass on or transfer clients’ data. Perhaps it is feasible to have no or very few security risks by limiting the usage of Huawei’s equipment to less crucial parts of 5G networks, but the opinions differ over this approach among telecom and security experts in Europe.

The Dutch government’s report on the new China strategy will be published shortly before the summer, is the latest message. Meanwhile, Australia and New Zealand have dropped Huawei as a candidate partner for 5G infrastructure under pressure from the United States. The UK and Canada are considering doing the same. And the Netherlands? The non-naive master merchant Rutte most likely is busily forging strategic plans and speeches which will appeal to both Trump and China. He can be entrusted such a balancing act.

And Ajax? Will the club extend the technology contract with Huawei in order to offer its fans a super-fast 5G experience in the Johan Cruijff arena by 2020? Or will the Ajax board let it depend on the advice of equilibrist Rutte? If it requires a bit of spying and eavesdropping in the PSV camp to ensure the title will end up in Amsterdam next season at least, who knows Ten Hag will whisper in our premier’s ears not to show Huawei the door. Contract extension with Huawei is in the offing in this scenario…